If you would like to schedule an appointment or have questions about our services, you can click here to fill out our contact form or if you prefer, call us at 920-486-6922.

What is a balance disorder?

A balance disorder is a disturbance that causes an individual to feel unsteady, giddy, woozy, or have a sensation of movement, spinning, or floating. An organ in our inner ear, the labyrinth, is an important part of our vestibular (balance) system. The labyrinth interacts with other systems in the body, such as the visual (eyes) and skeletal (bones and joints) systems, to maintain the body’s position. These systems, along with the brain and the nervous system, can be the source of balance problems.

How does the balance system work? 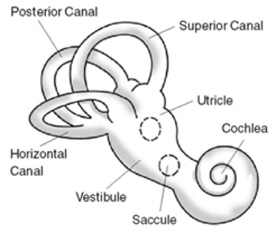 Movement of fluid in the semicircular canals signals the brain about the direction and speed of rotation of the head–for example, whether we are nodding our head up and down or looking from right to left. Each semicircular canal has a bulbed end, or enlarged portion, that contains hair cells. Rotation of the head causes a flow of fluid, which in turn causes displacement of the top portion of the hair cells that are embedded in the jelly-like cupula. Two other organs that are part of the vestibular system are the utricle and saccule. These are called the otolithic organs and are responsible for detecting linear acceleration, or movement in a straight line. The hair cells of the otolithic organs are blanketed with a jelly-like layer studded with tiny calcium stones called otoconia. When the head is tilted or the body position is changed with respect to gravity, the displacement of the stones causes the hair cells to bend. 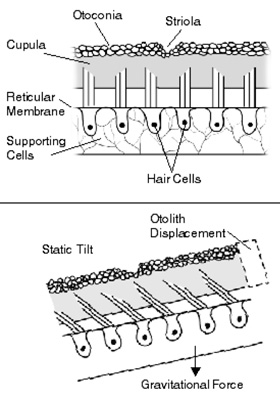 The balance system works with the visual and skeletal systems (the muscles and joints and their sensors) to maintain orientation or balance. For example, visual signals are sent to the brain about the body’s position in relation to its surroundings. These signals are processed by the brain, and compared to information from the vestibular and the skeletal systems. An example of interaction between the visual and vestibular systems is called the vestibular-ocular reflex. The nystagmus (an involuntary rhythmic eye movement) that occurs when a person is spun around and then suddenly stops is an example of a vestibular-ocular reflex. 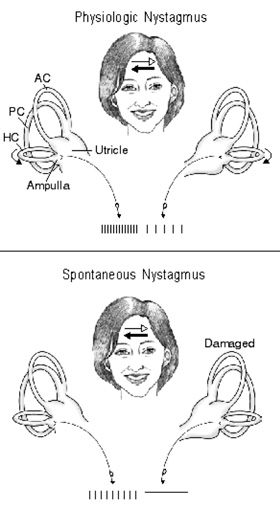 What are the symptoms of a balance disorder?

Some individuals may also experience nausea and vomiting, diarrhea, faintness, changes in heart rate and blood pressure, fear, anxiety, or panic. Some reactions to the symptoms are fatigue, depression, and decreased concentration. The symptoms may appear and disappear over short time periods or may last for a longer period of time.

What causes a balance disorder?

Infections (viral or bacterial), head injury, disorders of blood circulation affecting the inner ear or brain, certain medications, and aging may change our balance system and result in a balance problem. Individuals who have illnesses, brain disorders, or injuries of the visual or skeletal systems, such as eye muscle imbalance and arthritis, may also experience balance difficulties. A conflict of signals to the brain about the sensation of movement can cause motion sickness (for instance, when an individual tries to read while riding in a car). Some symptoms of motion sickness are dizziness, sweating, nausea, vomiting, and generalized discomfort. Balance disorders can be due to problems in any of four areas:

What are some types of balance disorders?

Some of the more common balance disorders are:

Benign Paroxysmal Positional Vertigo (BPPV)–a brief, intense sensation of vertigo that occurs because of a specific positional change of the head. An individual may experience BPPV when rolling over to the left or right upon getting out of bed in the morning, or when looking up for an object on a high shelf. The cause of BPPV is not known, although it may be caused by an inner ear infection, head injury, or aging.

Labyrinthitis–an infection or inflammation of the inner ear causing dizziness and loss of balance.

Ménière’s disease–an inner ear fluid balance disorder that causes episodes of vertigo, fluctuating hearing loss, tinnitus (a ringing or roaring in the ears), and the sensation of fullness in the ear. The cause of Ménière’s disease is unknown.

Perilymph fistula–a leakage of inner ear fluid to the middle ear. It can occur after head injury, physical exertion or, rarely, without a known cause.

How are balance disorders diagnosed?

Diagnosis of a balance disorder is complicated because there are many kinds of balance disorders and because other medical conditions–including ear infections, blood pressure changes, and some vision problems–and some medications may contribute to a balance disorder. A person experiencing dizziness should see a physician for an evaluation.

The primary physician may request the opinion of an otolaryngologist to help evaluate a balance problem. An otolaryngologist is a physician/surgeon who specializes in diseases and disorders of the ear, nose, throat, head, and neck, with expertise in balance disorders. He or she will usually obtain a detailed medical history and perform a physical examination to start to sort out possible causes of the balance disorder. The physician may require tests to assess the cause and extent of the disruption of balance. The kinds of tests needed will vary based on the patient’s symptoms and health status. Because there are so many variables, not all patients will require every test.

Some examples of diagnostic tests the otolaryngologist may request are a hearing examination, blood tests, an electronystagmogram (ENG–a test of the vestibular system), or imaging studies of the head and brain.

The caloric test may be performed as part of the ENG. In this test, each ear is flushed with warm and then cool water, usually one ear at a time; the amount of nystagmus resulting is measured. Weak nystagmus or the absence of nystagmus may indicate an inner ear disorder.

Another test of the vestibular system, posturography, requires the individual to stand on a special platform capable of movement within a controlled visual environment; body sway is recorded in response to movement of the platform and/or the visual environment.

How are balance disorders treated?

There are various options for treating balance disorders. One option includes treatment for a disease or disorder that may be contributing to the balance problem, such as ear infection, stroke, or multiple sclerosis. Individual treatment will vary and will be based upon symptoms, medical history, general health, examination by a physician, and the results of medical tests.

Another treatment option includes balance retraining exercises (vestibular rehabilitation). The exercises include movements of the head and body specifically developed for the patient. This form of therapy is thought to promote compensation for the disorder. Vestibular retraining programs are administered by professionals with knowledge and understanding of the vestibular system and its relationship with other systems in the body.

For people diagnosed with Ménière’s disease, dietary changes such as reducing intake of sodium may help. For some people, reducing alcohol, caffeine, and/or avoiding nicotine may be helpful. Some aminoglycoside antibiotics, such as gentamicin and streptomycin, are used to treat Ménière’s disease. Systemic streptomycin (given by injection) and topical gentamicin (given directly to the inner ear) are useful for their ability to affect the hair cells of the balance system. Gentamicin also can affect the hair cells of the cochlea, though, and cause hearing loss. In cases that do not respond to medical management, surgery may be indicated.

A program of talk therapy and/or physical rehabilitation may be recommended for people with anxiety.

How can I help my doctor make a diagnosis?

You can take the following steps that may be helpful to your physician in determining a diagnosis and treatment plan.

Lastly, remember to write down any instructions or tips your doctor gives you.

What research is being done for balance disorders?

Recent findings from studies supported by the National Institute on Deafness and Other Communication Disorders (NIDCD) suggest that the vestibular system plays an important role in modulating blood pressure. The information from these studies has potential clinical relevance in understanding and managing orthostatic hypotension (lowered blood pressure related to a change in body posture). Other studies of the otolithic organs, the detectors of linear movement, are exploring how these organs differentiate between downward (gravitational) motion from linear (forward-to-aft, side-to-side) motion.

Other projects supported by NIDCD include studies of the genes essential to normal development and function in the vestibular system. Scientists are also studying inherited syndromes of the brain that affect balance and coordination.

The Institute supports research to develop new tests and refine current tests of balance and vestibular function. For example, scientists have developed computer-controlled systems to measure eye movement and body position by stimulating specific parts of the vestibular and nervous systems. Other tests to determine disability, as well as new physical rehabilitation strategies, are under investigation in clinical and research settings.

NIDCD, along with other Institutes at the National Institutes of Health, joined the National Aeronautics and Space Administration (NASA) for Neurolab, a research mission dedicated to the study of life sciences. Neurolab focused on the most complex and least understood part of the human body, the nervous system (including the balance system).

Exposure to the weightlessness of space is known to temporarily disrupt balance on return to Earth and to gravity. A team of NIDCD and NASA investigators had previously studied the effects of microgravity exposure on balance control in astronauts who had returned from short-duration space flight missions, but these studies did not include an aged individual. During the October 29-November 7, 1998, Space Shuttle Discovery mission, NIDCD and NASA collaborated in another study of postflight balance control. For the first time, a previously experienced, but now elderly astronaut, Senator John Glenn, participated. Data collected during this mission, which are still being analyzed, may help to explain the mechanisms of recovery from balance disorders experienced on Earth as well as in the space environment. Scientists also hope that this data will help to develop strategies to prevent injury from falls, a common occurrence among people with balance disorders, particularly as they grow older.